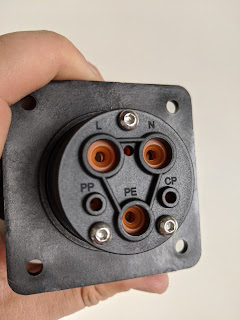 The charger I'm using is the TSM2500 144V from ThunderStruck and I added a female J1772  plug for it to get power from a standard EV charger (which eventually gets it from the wall or via hard wiring). 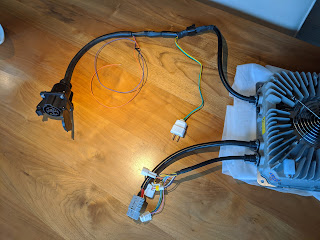 Ultimately, after some time spent recalling and practicing how to reliably splice and solder wires, the result was the Frankencable shown in these images. Jutting out from the middle of this Frankencable are a ground wire (with a standard wall-socket plug) as well as both the J1772 proximity and pilot wires.  These proximity and pilot wires go directly into the ThunderStruck EVCC 3.0 that will actually turn the TSM2500 on and off using CAN commands. 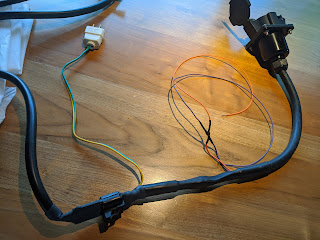 As part of making this Frankencable, I messed up the nice Anderson connector that came installed on the TSM2500. I replaced it with a Delphi Metri-Pack 280-series sealed connector, as can be seen in the bottom of the above picture.
Finally, this Frankencable is just a place-holder while I'm making the car, and getting the drivetrain running.  I'll do a better cable once everything is fully mounted, etc.